Year 12 is now in full swing for thousands of students across Australia. A previous survey of 722 Year 12 students in New South Wales paints an alarming picture. The survey suggests a staggering 42% of students experience high-level anxiety symptoms, of clinical concern, with 16% of these students experiencing extremely severe levels of anxiety.

Throughout the course of my work as a clinical psychologist, I meet many Year 12 students placing crippling amounts of pressure on themselves to produce the perfect HSC result, and this is leading to anxiety, stress and unhappiness.

Family and school culture contribute to stress and anxiety

I have observed that the culture within some schools and families is adding to the already high levels of pressure experienced by students. Students are acutely aware of their class rankings, and I often hear students say ‘I’m at the bottom of my class’ or ‘I am dumber than my mates’. Teachers can scare students with constant talk about the negative outcomes which may follow if they don’t get great grades.

Similarly, parents can appear overly interested in their teenager’s grades, and questions about test and assignment results can be the focus of dinner table discussions. 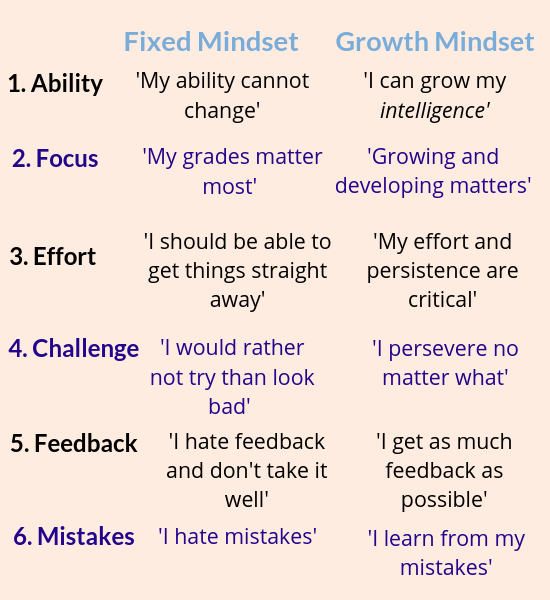 So, how can Year 12 students develop a healthy approach to their learning?

Stanford University Professor Carol Dweck has proposed that two mindsets can either actively promote or work against learning – these are known as fixed and growth mindsets.

In a series of studies, Dweck and her team split Year 5 students into two groups and they completed a number of learning tasks. On the first learning task, one group of students were praised for their intelligence (‘You must be smart at these problems’) while a second group of students were praised for their efforts (‘you must have worked hard at these problems’). After receiving feedback they had failed a subsequent task, students praised for their talents tended to shy away from harder learning problems, enjoyed harder learning problems less and demonstrated worse task performance. Dweck described these children as having fixed-mindset characteristics while those praised for their efforts were more likely to develop growth mindset characteristics.

Fixed mindset learners are thought to be more vulnerable to experiencing anxiety and stress as they tend to believe that their abilities come naturally. They place emphasis on achieving good grades and beating their peers. They seek out their learning based on what they are good at and looking good, which makes them fear mistakes, avoid challenges, and respond poorly to feedback.

Growth mindset learners decide on areas of learning based on interest. They believe learning occurs through persistence and hard work, placing emphasis on their efforts to learn rather than grades. They monitor their personal improvements in learning and don’t compare themselves to their peers. They put themselves up for challenges, and view mistakes and feedback as a natural part of learning.

However, shifting mindsets is easier said than done. One teenager recently said to me ‘How can I develop a growth mindset when everything in my environment tells me to focus on my grades and to be better than my friends?’

Here are some tips for parents wanting to promote a growth mindset culture at home and some of my favourite resources: